Chris Routh, long-time judge of the Information Book Award, and Geoff Dubber, past chair the School Librarian of the Year Award, look back at their time being involved with SLA's awards.

The School Library Association has a long history of hosting and supporting awards to shine a spotlight on the fabulous work being done in school libraries.

As part of celebrations for our 85th year as an organisation we are launching two fabulous new awards: the Community Award and the Enterprise of the Year Award.

Below we talk to Chris Routh and Geoff Dubber about their time being involved with the awards over previous decades.

When I joined the judging panel for the Information Book Award, its founder SLA’s Reviews Editor Chris Brown was Chair and the meetings and award ceremony were held at the London offices of Hachette UK, who sponsor the award. Since its establishment in 2010, the panel has always consisted of experienced primary and secondary school librarians, SLA board members and a representative from Peters Bookselling Services who support the award.

Chris Brown was a passionate advocate for shining the spotlight on information book publishing – awards and events focusing on this area of publishing for children were, and still are, few and far between. He was thorough in his scrutiny of all the submitted titles and was a stickler for checking accuracy, making sure that all the long-listed titles were also read by subject experts. We all enjoyed meeting in London and particularly in the wonderful open-plan offices at Carmelite House, where the excitement of creating and publishing new books was palpable. The roof-top award ceremonies offered the perfect place and opportunity to celebrate the winners in front of an audience made up of fellow book creators and supporters and promotors of children’s information books.

Or course, in 2020 everything changed with COVID, and the meetings and award ceremony were held online. Margaret Pemberton had taken over as Chair and some other fresh faces had also joined the panel. Margaret has written eloquently about the continuing importance of the IBA here https://www.sla.org.uk/article/hannah-groves/why-is-the-information-book-award-important; and one of the newest members of the panel, Charlotte Taylor-Smith, has written about her personal experiences and the impact of the award here https://fcbg.org.uk/judging-the-2020-school-library-association-information-book-award/

2017 saw the launch of the Hachette Children’s Group Award for Outstanding Contribution to Information Books. This special award is given to an eminent UK writer or illustrator of information books for children, to mark an exceptional contribution in their field. I suspect that this award is less well-known than it should be, with each of the past winners contributing to non-fiction publishing in very different ways; and each with a body of high-quality work deserving much wider acclaim. The winners to date are Nicola Davies, Nicola Morgan, Marcia Williams, Mick Manning and Brita Granstrom and Anita Ganeri. This is a brilliant initiative which has helped to draw further attention to the highest standards and best examples of information book publishing.

For me, however, one of the most important elements of the IBA is the opportunity afforded to young readers to get involved in voting for their favourites in each category, as well as for their overall ‘winner’. The Children’s Choice winners are all presented with a beautiful trophy which, for many recipients, is possibly even more meaningful than being selected by the judging panel. The young voters are, after all, their intended, hoped-for audience. During my involvement as a judge, I have enjoyed running library and classroom-based sessions with young readers, challenging them with quizzes based on the shortlisted books, discussing book selection criteria in general and hearing their views on the merits of specific books. It provides a great way to encourage the development of critical literacy skills and to build confidence in voicing opinions and preferences. Most of all, the scheme promotes a general interest in information books and validates the enjoyable activity of reading non-fiction for personal interest and pleasure.

Unfortunately, many schools are financially challenged when it comes to buying more books. I am therefore delighted that finding ways to enable more children to access the shortlists and get involved in the Children’s Choices element of this prestigious award is high on the School Library Association’s agenda for the future.

Launching the School Librarian of the Year Award by Geoff Dubber

One of the best ideas to strengthen, encourage and promote schools libraries and staff came out of our weekend course in June 2003.

Everyone had gathered at Leicester University to listen, learn, and chat with the usual stimulating array of key note speakers and workshop hosts and other delegates. We were excited to listen to the outstanding Carnegie award winning author and charismatic speaker, our new president Aiden Chambers. Aiden had run a school library himself in a Stroud school – his words came from the heart and from experience.  He felt deeply that school library staff of all persuasions needed more recognition – so was born the idea of the SLA’s School Librarian of the Year Award.

Officers under the new Chair Alec Williams (2003/4) and with the guidance the SLA’s Executive Secretary, Kathy Lemaire, immediately set about setting up the nuts and bolts of the scheme – leadership, timing, sponsorship, application procedures, promotion and involvement by the SLA executive committee members. The award was open to all, not simply SLA members, and initially no distinction was made between primary, special school and secondary school library staff. It was agreed to create and announce an Honour List (at Aiden’s insistence) and the winner would be selected from that shortlist.

The new 2003/4 Vice Chair Eileen Armstrong, was given the role of chairing the project and it was decided to launch for the school year 2004/5 with the first recipient to be announced at the weekend course in 2005.

Applications flooded in, to be carefully read and sifted by all judges, and then visits to these schools arranged which involved travel and overnight stays all over Great Britain. Visiting Orkney in the dark days of December just before Christmas wasn’t easy, although Frances Sinclair the librarian there was wonderful!

Our first winner was the outstanding Anne Robinson from Nicholas Chamberlain School in Warwickshire SLYA 2005 (sla.org.uk). Kathy was inspired to invite TV personality Anne Robinson to present that award to her namesake! The Honour List that year comprised a wonderful mix of librarians, both secondary and primary. An added bonus of the award has always been that it draws into the SLA new talent and school librarians  we hadn’t necessarily heard of before. 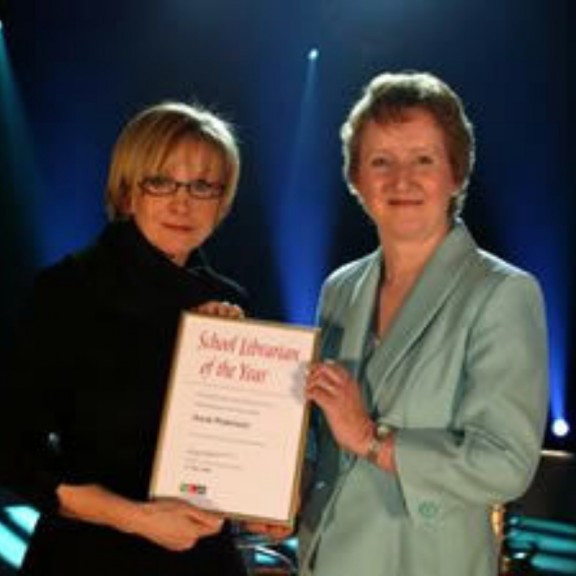 The following year 2006 again saw a flood of applications, many visits by the judges and the amazing Anne-Marie Tartar from Ripon Grammar School was declared the winner. The famous Jacqueline Wilson did the presentation this year.

I took over as SLA Vice-Chair (while continuing my role in Publications) at the weekend course in June 2006. Well established now after two cycles, we wondered what this next flood of applications might bring! I was keen to anonymise the applications at the earliest opportunity to show no fear or favour to any possible applicant.

We did the careful read and agreed our visit shortlist and I remember we all sat round with our numbered applications and then asked Kathy to identify the applicants for us. The standard was very high. I can’t quite remember which number was which now, perhaps it was No 13 ! but it was identified as Amanda Gough of Kellett School Hong Kong. A gasp of surprise came from us judges and a smile from Kathy!  All was agreed we had enough sponsorship for three judges to go to Hong Kong. Now the Award had an truly international dimension to it. !

We visited several outstanding UK school librarians during the autumn term and on 12 Jan 2007 Kathy, Steve and I all met at Heathrow for our trip to Kellett School. We loved the Hong Kong skyline and harbour from Victoria Peak and the tram, we marvelled at the colourfully illuminated skyscapers at night, we admired Hong Kong’s amazing public library and we loved crossing the harbour to Kowloon and then exploring the markets. What an excellent trip and what a friendly and an outstanding international all age school we visited too, although we were only concerned with the primary stage. Amanda was unanimously agreed for our Honour List and the Head teacher agreed to fly over for the announcement of the winner.

On a wonderful spring day, 2 April 2007, at the Tower of London Michael Morpurgo, one of our patrons did us proud. It was a day long to remain in the memory. He gave a typically rousing ‘Michael’ speech about the importance of school librarians and libraries and the SLA and announced the Honour List for us. We had six outstanding librarians that included Fay Dowding, Amanda Gough from Hong Kong, Barbara Hickford, Ingrid Hopson, Helen Pallett and Helen Roberts.  Kathy had booked the venue as Birmingham Botanical Gardens and invited our new President author and TV personality Gervase Phinn to do the announcement. All the librarians did a presentation and the envelope was opened - Ingrid Hopson of George Abbot School Guildford was our very worthy winner for 2007. 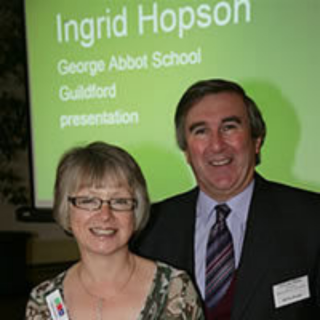 The SLA’s School Librarian of the Year Award was well and truly launched and established thanks to some outstanding work and graft by Kathy and the SLA office team and all those Officers and Executive Committee members who contributed ideas, time and total commitment to the idea. As we all know it has gone from strength to strength since those early days and long may it continue to fanfare the remarkable achievements of school library staff across the UK and indeed the world. I was delighted to be a part of it.