Research was released as part of the #EndSexismInSchools campaign

New research carried out by the End Sexism In Schools campaign team reveals the shocking extent of gender bias in the KS3 English Curriculum across schools in England.

Analysis of data gathered for 891 schools across 104 Local Education Authorities (LEAs) shows a chronic underrepresentation of women’s works and experiences in the English curriculum. Headline findings include: 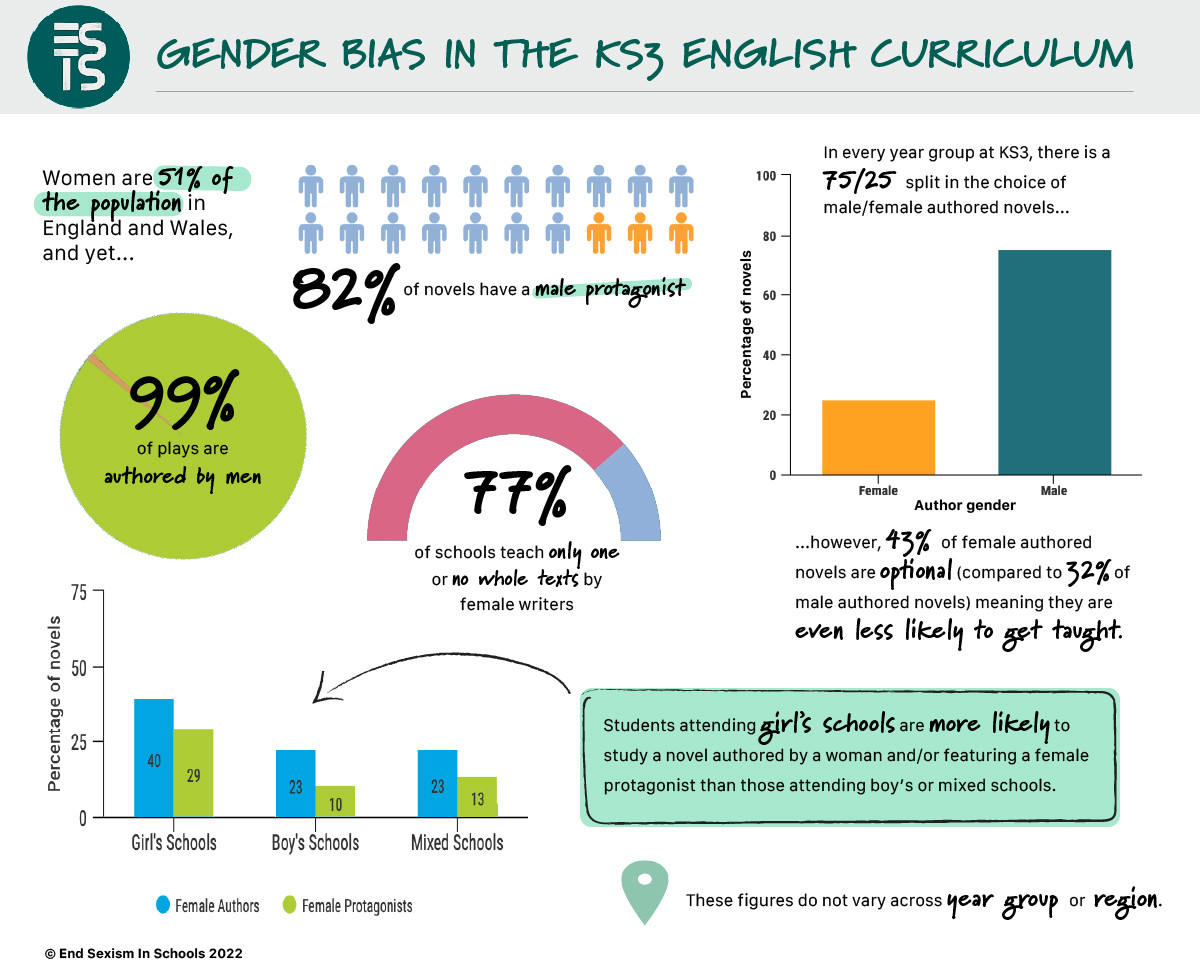 The research, which collected data from school websites and through Freedom of Information requests, also highlights a pattern of female authors being featured on school curricula in the form of individual poems, extracts from longer works, short stories and speeches, as opposed to longer form texts such as whole novels and plays. Whilst there is huge value in these short form works, in the context of the secondary curriculum, the reality is that they will be taught in the course of one or two lessons, whilst the novels and plays which are dominated by white male voices will be studied over an extended period of time – potentially in every English lesson for an entire 12-week term. This delivers a subconscious message to students that the works of men deserve more time, with the implication that they are more valuable.

Furthermore, the research gathered by End Sexism in Schools demonstrates that “where schools are diversifying the content of their curricula and introducing more whole texts by writers of colour into the classroom, they are doing so primarily through teaching female writers of colour”. They found that 21% of novels by female authors on the curriculum at KS3 are by women of colour, but only 2% of male authors are men of colour. This raises important questions about attitudes to diversifying the curriculum: Are schools opting to kill two birds with one stone by ticking the ‘ethnicity’ and ‘gender’ box with a single text? Is there a perception that white male authored texts are essential to the curriculum in a way white female authored texts are not? Are there fewer men of colour than women of colour writing contemporary books for children and young people, limiting teachers’ choices?

The current reality is that the white male voice dominates the English curriculum, to the detriment of children and young people who experience a limited range of perspectives that reinforces patriarchal norms.

As the campaign continues to move forward, they are calling for government to introduce and support a whole school, whole curriculum approach to ending sexism in schools. You can get involved and sign their petition here.

The campaign also aims to work with teachers, authors and schools to create adaptable resources and schemes of work to help schools easily make improvements to the gender diversity of their curriculum. If you'd like to be involved, you can get in touch with the campaign.

The campaign does not plan to stop at the English curriculum. They will be working to identify gender bias across the curriculum and providing solutions to tackle it. Their history sub group is already in full swing to uncover what has happened to HERstory in our schools – and again, you can get in touch if you would like to get involved.

You can read and download the full research report here.