Punching the Air starts with Amal in court. He has pleaded not guilty to the assault of another teen who was battered around the head with a skateboard. Amal was skateboarding and admits to throwing the first punch. The victim is unable to give his side of the story as he’s in hospital in a coma. So Amal is being judged on all sides. Amal is black, the victim white. But Amal is not the person he is being made out to be. His lawyer has given him a book to read to take his mind off his situation whilst being held before his trial. But Amal is a reader and has read this book plus countless others many times. He’s also a poet and an artist and only having access to writing paper and pens whilst supervised he finds especially hard.

The reader gets to know more of the real Amal because of hearing his thoughts, but the judge and jury are bringing prejudices to the trial which should never enter the courtroom. At this point, even if Amal was guilty I’d be on his side. But he is innocent of the crime of battery, yet gets found guilty and is sent to juvenile detention. He then has to survive among rough criminals all fighting for their place in the hierarchy of prison life. So Amal had to be very careful what he lets slip. But he does manage to secure a place in a creative class where the teacher had been brought in to do an art class. However, with the bureaucracy of institutions, the paint she had requested was not delivered until her last lesson of the short placement she was on. So leaving it with the inmates, over the course of a week when they are allowed access, Amal and a few others plan and execute the mural the teacher had received permission for. But following its completion the higher powers of the institution decide they don’t understand what it represents and to avoid conflict whitewash over the whole thing.

We must all have assumed some things about some people at one stage or another, but this makes me ashamed that I may be considered in the same category as those judging Amal. The worst thing about this book is that it is based on a true story, retold and some details changed, by one of the accused who had always pleaded innocent. BECAUSE HE WAS!

The destruction of Amal's work sums up what those in power are doing to Amal. Get rid of that which isn't understood by white men in power because they consider it worthless.

This is a verse novel, but some chapters are titled so they can be used as stand alone poems. One poem especially to me stood out when Amal was saying he was not the boy everyone else thought he was simply by looking at him.

This is an important book and should provoke us all into never pre- judging anyone.

The book could be used to pick out individual poems, but it’s also an important book in the fight against racism. It is set in America, but could happen here. It can be used as a discussion and would be great for book groups.

Ibi Zoboi holds an MFA from Vermont College of Fine Arts. Her novel American Street was a National Book Award finalist and a New York Times Notable Book. She is also the author of Pride and My Life as an Ice Cream Sandwich, a New York Times bestseller. She is the editor of the anthology Black Enough. Born in Haiti and raised in New York City, she now lives in New Jersey with her husband and their three children.

Dr. Yusef Salaam was just fifteen years old when his life was upended after being wrongly convicted with four other boys in the "Central Park jogger" case. In 2002, after the young men spent years of their lives behind bars, their sentences were overturned. Now known as the Exonerated Five, their story has been documented in the award-winning film The Central Park Five and in the highly acclaimed series When They See Us. Yusef is now a poet, activist, and inspirational speaker. He is the recipient of a Lifetime Achievement Award from President Barack Obama, among other honours. He lives in Atlanta, Georgia, with his wife, Sanovia, and their children.

Title: Because of You 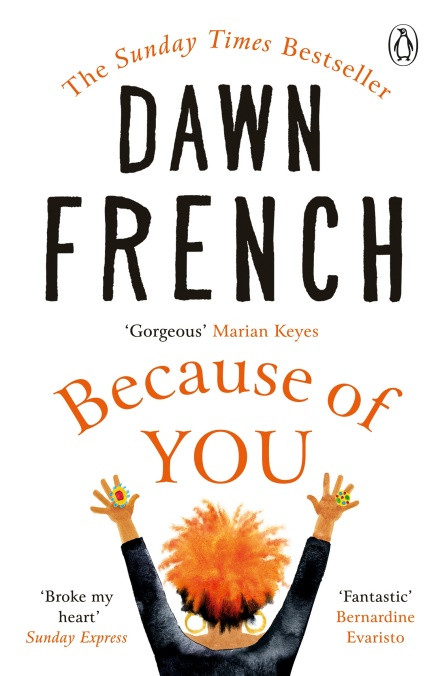 Two very different women give birth in the same hospital. Both baby daughters are wanted by their parents. One is a very tiring but happy outcome. The other, not so.

The story picks up a various points in their subsequent lives to see what is happening, then focuses on 18 years later when one daughter finds she too is pregnant. This provokes a whole chain of events which happen very fast, resulting in a lot more emotional outpourings from everyone.

You can’t say this was a light read because of the subject matter, but the fact that it was a story I found more palatable as in real life I would have had no sympathy for one family, yet French cleverly wrote it so the reader felt empathetic for both families. However, although I should have done, I did not see the ending coming. That was harrowing, yet too strangely touching because of the unconditional love of a mother for her daughter.

I love Dawn French and have read some of her other books. I remember seeing a review of this and thinking that it sounded upsetting so avoided it. But, having forgotten that, another review made it sound a great weekend read. Then once I got into it, I remembered why I had avoided it in the first place. But by then I had to find out what happened.

One family in that delivery room was so genuine and so pleased to welcome their new addition. The other couple seemed ill suited as the politician father was obnoxious, although his wife saw straight through him.

In the immediate aftermath of birth the genuinely good couple experienced intense pain which, as a reader, you too were feeling. Later, the other couple too faced suffering they should not have had to deal with.

But, this is Dawn French and there was humour. The detective with his malapropisms was completely annoying, but at the end when he gives the politician a piece of his mind, I was so with him.

This book should have been very upsetting, but the writing focussed on the good in everyone.

There is no such thing as black and white. Grey exists and both sides of the story are equally as touching, even though one crime was unforgivable.

This is a holiday read for adults, a change from MG or YA issues.

Dawn French has been making people laugh for 30 years. As a writer, comedian and actor, she has appeared in some of this country's most long-running and celebrated shows, including French and Saunders, The Vicar of Dibley, Jam and Jerusalem, and more recently, Roger and Val Have Just Got In. Her first three novels, A Tiny Bit Marvellous, Oh Dear Silvia and According to YES, are all Sunday Times bestsellers.