Starting with the youngest readers we have two lovely board books from Pat-a – Cake, Hachette’s pre-school imprint. Clap Hands: Here Comes Christmas illustrated by Hilli Kushnir (£6.99, 978-1526380616) has lots of interactive features with textures to feel on every page and a matching game page at the end. Stephen, the Sprout of Kindness by Richard Dungworth and Samantha Meredith (£6.99, 978-1526382450) is green and sprout shaped and is a lovely rhyming story about kindness. 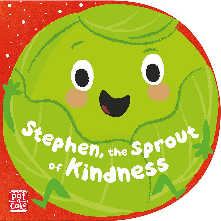 You may have noticed a preponderance of llamas in 2019? For Christmas we have Fa-la-la-la-llama illustrated by Ben Whitehouse (£8.99, 9780241401330) with a musical button to press ans sing along (but luckily with an off switch too!). Newly available in board book format are Merry Christmas Hugless Douglas by David Melling ( £ 6.99, 978-1444947007) because hugs are very important at Christmas. The Twelve Days of Christmas By Britta Teckentrup (Little Tiger, £6.99, 978 1 78881 470 6) has translated very well to the board format  with the traditional rhyme illustrated with beautiful cut out pages.

Picture Books
There are lots of lovely picture books as you would expect and paperback reissues too, but the only one of those I will mention is The Christmas Unicorn by Anna Currey ( Oxford, £6.99, 9780 19 277209 1) which first appeared in 2006 long before the current obsession with unicorns started but cleverly jumping on the bandwagon! It is a lovely gentle story about a little girl staying with grandparents, needing a friend and for her Dad to get home for Christmas and with a magical unicorn’s help she gets her wish. Also from Oxford is a future classic, The Tree That's Meant to Be (£12.99, 978 0 19 276980 0) written and illustrated by the very talented Yuval Zommer (best known for his Big Book of .. series) It's about a crooked little fir tree and has a powerful message about love and embracing difference. On a similar theme from Bloomsbury we have Chris Naylor-Ballesteros with The Lonely Christmas Tree (£7.99, 978-1408892923). Inspired by the Christmas poem 'Twas the Night Before Christmas and with a lovely rhyming text it has an uplifting message about overcoming loneliness and celebrating being together. If there is no substitute for the original Clement C Moore poem, then new publisher Scallywag Press have a real treat for you. They have rediscovered Roger Duvoisin’s eye catching interpretation from 1954 with its tall narrow format depicting the chimney down which Santa travels. The bright primary colours look very striking and this will have a huge retro appeal (The Night Before Christmas. £12.99, 978 1 912650 19 4).

Following the poetic theme, from Nosy Crow, we have Mouse’s Night Before Christmas by Tracey Corderoy and Sarah Massini (£6.99, 978-1788005449) where a lonely mouse is the only one awake to help Santa who is lost in a blizzard. Also from Nosy Crow, Snow Still is a beautiful simple tale by Holly Surplice (£11.99, 978-1788004817). A little fawn wakes and discovers the magic of snow.  In contrast, The Snowiest Christmas Ever by Jane Chapman (Little Tiger, £11.99, 978 1 78881 390 7) delightfully shows that you can have too much snow! Also from Little Tiger, The Most Wonderful Gift in the World by Mark Sperring and Lucy Fleming (£11.99, 978 1 78881 382 2) reveals a clever plot from Santa to bring Little Bunny Boo-Boo his deepest wish and proves that friendship is the greatest gift of all. Macmillan have a particularly strong offering this year with The Return of Spoutzilla by Tom Jamieson and Mike Byrne ( £6.99, 978 1 5098 9461 1) but, don’t worry the meanest, greenest veggie villain discovers his softer side …eventually! Sue Hendra and Paul Linnet have created characters from the unlikeliest candidates in the past like Cake and their previous festive Snowball. This time meet Christmas Tree who wants to do anything and everything apart from stand in a corner and wear baubles! (Oh, Christmas Tree, £6.99, 978 1 5098 2750 3). Macmillan is of course the home of Alice in Wonderland and in a very original twist from debut author Carys Bexington we have The Night Before Christmas in Wonderland. Illustrated by the marvellous Kate Hindley this is a genius mash-up of the two stories which results in even the Queen of Hearts having a happy ending! (£12.99, 978 1 5098 7988 5) It will appeal most to slightly older children who know a bit about the original stories. Another longer story is Christmas Comes to Moominvalley- a specially commissioned re-telling of Tove Jansson’s classic story, The Fir Tree. Adapted by Alex Harridi and Cecilia Davidsson and translated by A.A.Prime, it tells of the Moomin family being woken from their winter sleep to prepare for Christmas and they have no idea what that is. The illustrations by Filippa Widlund capture the real spirit of Jansson’s originals. (£6.99,978 1 5290 0363 5). The icing on the cake however is from the Two Hoots imprint: Meerkat Christmas by the incomparable Emily Gravett ( £12.99, 978 1 509857296) featuring the lovable Sunny and his meerkat family from 2007 best selling Meerkat Mail. Sunny has been reading all about the perfect Christmas and his desert home does not fit so he sets off in search. Once again, we have his postcards and letters home to pore over and a surprise package at the end. 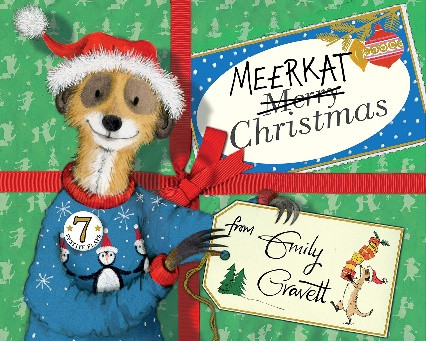 Packed with beautiful, witty detail this will become a Christmas heirloom!Back to the ubiquitous unicorns with Oscar the Hungry Unicorn Eats Christmas (Orchard, £6.99, 978 1 40835 582 4) by Lou Carter and Nikki Dyson. Oscar, with his pink coat and rainbow tail, proved very popular on his first outing and this will similarly fly off the shelves; just like Oscar does when he eats the Magic Reindeer Food! An altogether gentler unicorn appears in the successful Ten Minutes to Bed series from Ladybird: Little Unicorn’s Christmas by Rhiannon Fielding and Chris Chatterton ( £6.99, 978-0241414576)  is  the perfect soothing bedtime story.  Another festive follow-up, this time from Tom Fletcher with instead of a Monster or a Dragon we have an Elf. There’s an Elf in Your Book, illustrated by Greg Abbott ( Puffin, £11.99, 978 0 24135 727 9)takes you through the all important questions to see if you get on the Nice list and deserve Christmas presents, but, of course, the Elf is there to try and trick you into naughtiness!

Next, we have a new picturebook version of a lovely story by Abi Elphinstone that first appeared in the Winter magic anthology.  The Snow Dragon (Simon & Schuster, £7.99, 9781405295949), which is beautifully illustrated by Fiona Woodcock means this longer story will be enjoyed by older children. Older readers will also appreciate the beautiful art and a different interpretation of the story of Santa’s reindeer which might also get them discussing animal welfare in circuses. In Dasher by Matt Tavares (Walker,£12.99, 9781406387704) a reindeer escapes from her circus home and meets Father Christmas where she helps him to deliver his presents to children on Christmas Eve. In A Cat’s Christmas Carol by Sam Hay and Helen Shoesmith (Simon& Schuster, £6.99, 978 1 471183 799) we have three cold and lonely visitors turning up at Clawdia’s department store to show the grumpy security cat the true meaning of Christmas.  Where would Santa be without his beard? When he accidentally shaves it off its up to the elves to invent a solution in Santa’s New Beard by Caroline Crowe and Jess Pauwels ( Faber & Faber, £6.99, 978 0 571 33654 8) Finally to complete this section we have books directly linked to the traditional Nativity story. Leah’s Star, by Margaret Bateson-Hill introduces the innkeeper’s daughter into the familiar story, now seen through her eyes. Gorgeously illustrated by Karin Littlewood (Alanna Max, £12.99, 978 1 907825 255) this will become another treasured classic. Sarah’s Two Nativities by Janine M Fraser (Walker, £12.99, 9781406388725) is an important addition to your diversity collections. A little girl from a multi-faith family hears the nativity story from the perspectives of the Bible and Koran read by her Christian and Muslim grandmothers. Pugs have been another ubiquitous creature lately and now we have The Pug Who Wanted to Be A Reindeer by Bella Swift (Orchard, £5.99, 978 1 40836 034 7) where Peggy the pug is determined to make her family happy agaij even if it means going to the North Pole to ask Santa to help. Will be much enjoyed by six and seven year olds. From the wonderful (Five Children on the Western Front etc) Kate Saunders, we have The Great Reindeer Disaster, illustrated by Neal Layton (Faber & Faber, £6.99, 978 0 571 34898 5) featuring a miniature reindeer called Percy, the Trubshaw family, the planet Yule-1( the real home of Father Christmas) and a rogue reindeer teamed up with the evil Krampus to stop Christmas forever, this an exciting and funny delight! But Macmillan think they have the lowdown on the real family of Father Christmas. The Real Family Christmas (£6.99 , 978 1 529006 933)  has three funny stories all about them by Sue Mongredien, illustrated by Kate Pankhurst. Festive spin-offs from established series reach a new level of entertainment with The Bolds’ Christmas Cracker, from the duo of Julian Clary and David Roberts ( £6.99, 978 1 783448 425) packed with jokes and puzzles of all sorts- this will keep children happily occupied for hours. 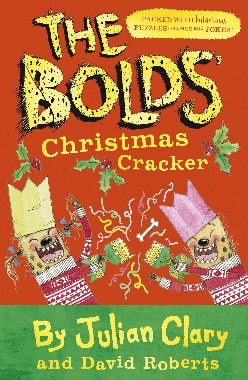 Winnie & Wilbur- The Santa Surprise by Laura Owen and Korky Paul (Oxford, £5.99, 978 0 19 276746 2) is a brand new story in the new format with stylish full colour illustrations, making this a real festive treat for fans.  Dave the Naughtiest Unicorn appears as you would expect in a festive episode of this popular series from Egmont. The Naughtiest Unicorn at Christmas by Pip Bird (£5.99, 9781405295949) ticks all the boxes. In Snowflakes, Silver and Secrets in the Seaview Stables Adventure by Tracey Corderoy (Simon & Schuster, £6.99,  9781471170454) when a family of travellers are wrongly accused of stealing silver from Brook Dale Manor, can Bryony and her pals solve the mystery and show everyone what Christmas really means? Another festive spin on a popular series is Rose Campion and the Christmas Mystery by Lyn Gardener ( Nosy Crow, £6.99, 978-1788000314) where its pantomime season at at Campions' Palace of Varieties and Wonders - but Rose Campion and her friends have more to worry about than who'll be filling the role of Cinderella! Fans will be delighted to hear that Tom Fletcher’s Christmasaurus is back. The eagerly awaited sequel The Christmasaurus and the Winter Witch ( Puffin, £12.99, 978-0241338520) will be reviewed in The School Librarian but it is just as charming as the first story. The tale includes time travel, issues involved with joining two families together and a very large helping of Christmas magic, perfect for a December read aloud.
Teen fiction
Not so much published for this age group, who generally just want good books rather than a festive spin, but a tie-in to the Netflix film might appeal. Let It Snow by John Green, Maureen Johnson and Lauren Myracles has three Christmas-themed romantic stories by three best-selling authors for teenagers (Penguin, £7.99, 9780141371207) Also who does not need a bit of cheesy romance at Christmas time? Love Secret Santa by S.A Domingo (Hodder, £7.99, 9781444953756) fits the bill perfectly. Angel (!) Green finds herself falling for her partner in her school charity fundraising campaign at Christmas time.