Varied Voices 2020 3: Being an Author: Lessons I Have Learnt

Pooja Puri talks about her writing process for the Varied Voices blog.

Being an Author: Lessons I Have Learnt

Being an author is an unusual job. When you first set out to write a story, you are faced with nothing but an empty page and the hazy wisps of an idea. There is no right way of writing, no one-size-fits-all technique. Much of being an author is about learning. Learning how to craft a story, learning how to build characters, learning, perhaps most of all, to keep faith in the idea you started out with at the very beginning. Whilst writing my debut novel, The Jungle, and following its publication, I have learnt a great deal about being an author – and I continue to build on these lessons daily!

Ever since I was a child, I always wanted to be an author. I remember visiting the library and bringing home, in true Matilda style, teetering towers of books. The stories I read would whisk me away from my favourite corner of the sofa into incredible worlds. I was always fascinated by the thought of where authors found their ideas. Part of me was quite certain that they spent all their time at a desk simply waiting for a flash of inspiration!

Funnily enough, one of the questions I am now frequently asked as an author is ‘Where do you get your ideas from?’ Like many writers, I carry a notebook to write down anything unusual or interesting I encounter whilst I am out and about. Sometimes, it can be the most unexpected thing which sparks an idea – a song lyric, a smell, an overheard fragment of conversation.

From my experience, writing does not happen entirely in a vacuum. The idea for my debut novel, The Jungle, came about after I read an article about the discovery of a body on the Norwegian coast. Subsequent investigation found that it belonged to a young man who had started his journey from the former refugee camp in Calais, 'The Jungle'. In a bid to leave the camp, he had tried to swim across the Channel but his efforts tragically resulted in the loss of his own life. The thought of someone risking everything for a second chance really stayed with me. When I undertook further research, I realised how many of those living in the camp were, in fact, teenagers and children. These two ideas eventually fused together to form the central concept of The Jungle. 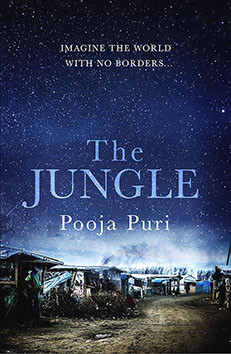 As a child, I believed that stories fell off an author’s pen onto the page, but now I know that rarely happens! Stories are like puzzles. Though you may have the threads of an idea, it can take weeks, months, even longer to untangle them, to shape them into a coherent whole. On a recent school visit, pupils were interested to know how long it took me to write The Jungle. Although I couldn’t give a definite timescale, I explained that my writing process is usually divided into different stages. I find that the plotting stage often takes a long time because this is the point where I am trying to decide on the crucial aspects of the story such as the setting and the characters. Without spending time on this preliminary ‘thinking’ stage, I find that my story can lose momentum when I begin writing.

Lesson 3: Stories have a mind of their own.

However much you plot and plan, stories and characters will inevitably do what they want to do. Through the drafting and editing process of The Jungle, I realised that there comes a point when the characters will suddenly take the reins of the story away from you or ‘tell’ you if a scene or dialogue doesn’t fit right. Leila often took the action into a direction I hadn’t planned – but somehow that felt right for her character!

The moment when you begin writing a story can be a daunting one. After finishing The Jungle, I thought I would be better prepared to face that first blank page when I started work on my next story. However, I quickly realised that wasn’t the case. As I continue writing in the future, I know that there will be plenty more for me to learn about my own writing process – but that’s also what makes being an author so interesting!

Pooja Puri graduated from King’s College London with a First Class degree in English Language and Literature. Whilst at university she read for a publishing house and has since worked in the education sector. She recently completed the MA in Writing for Young People at Bath Spa University. Her debut novel The Jungle was published in 2017 by Black and White’s YA imprint Ink Road and nominated for the CILIP Carnegie Medal 2018. She tweets @PoojaPuriWrites.